What is happening around us

If you are interested to participate, please register directly at: https://www.jsmea.or.jp/en/seminar/2020/malaysia/. 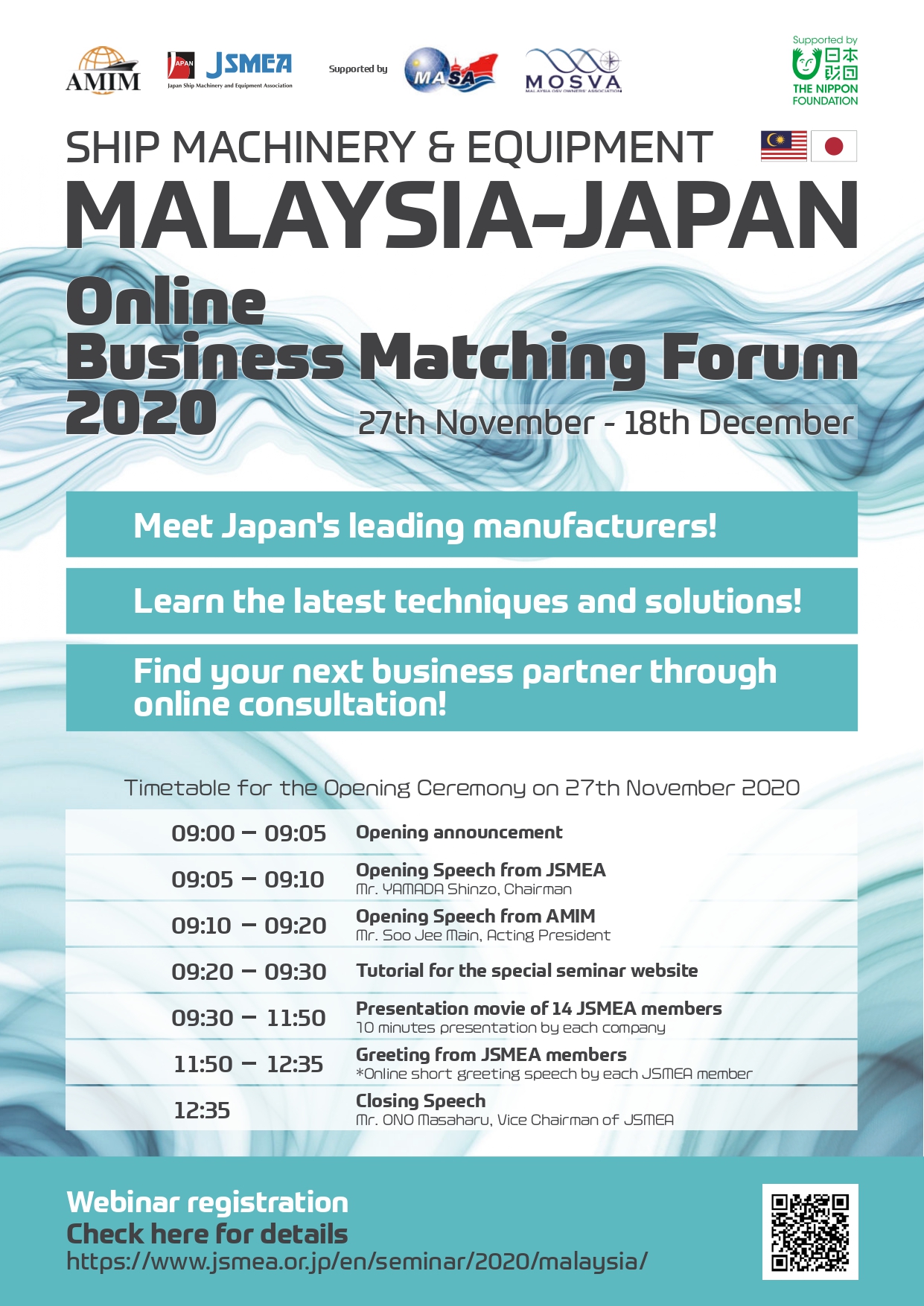 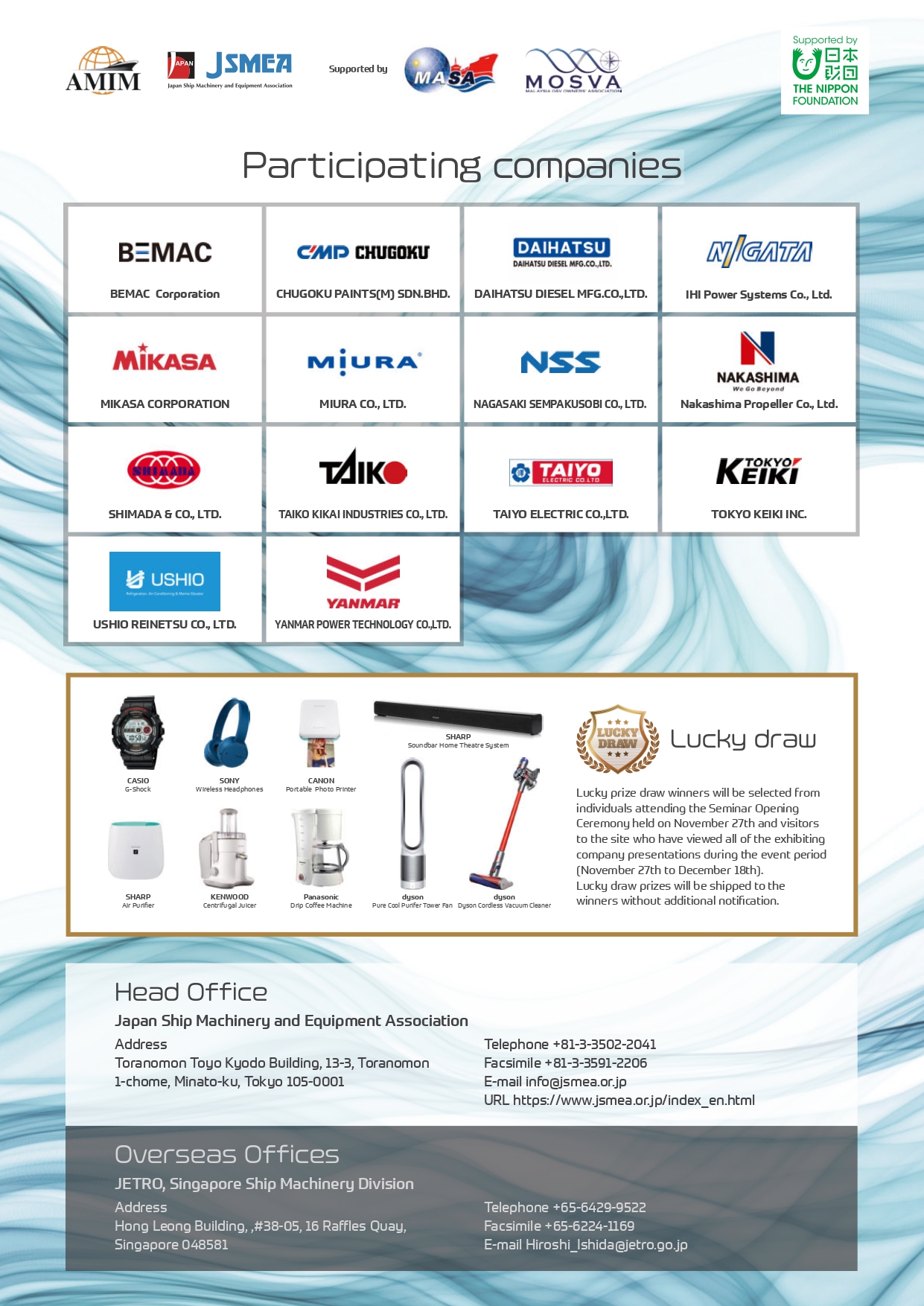 Courtesy visit by Embassy of The Republic of Indonesia 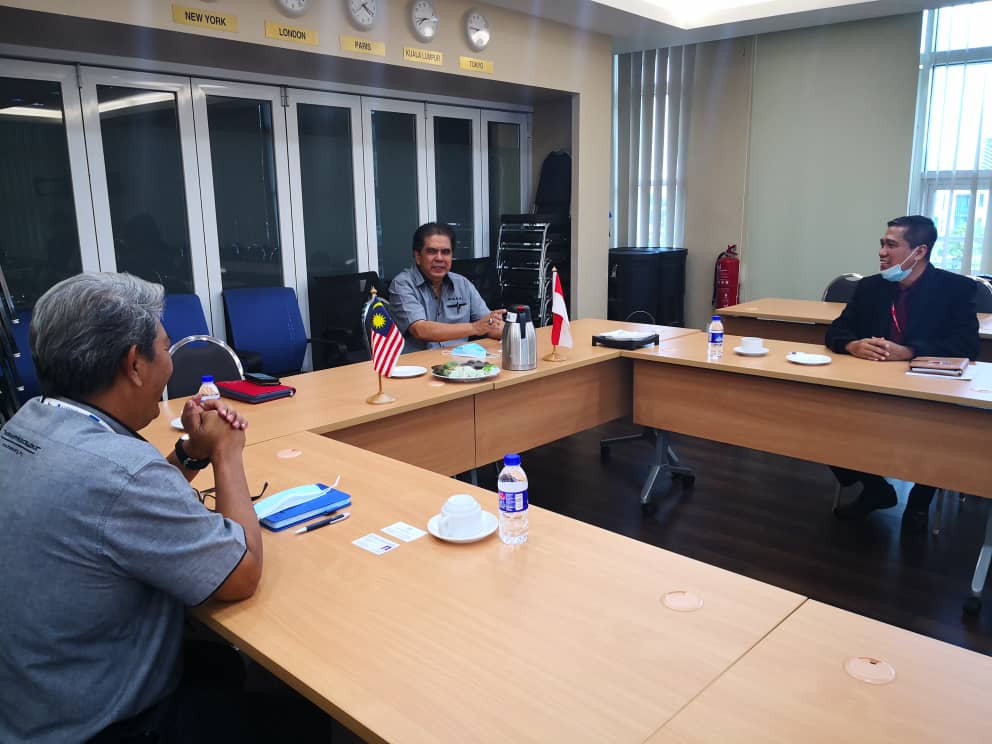 Issues centred on the Malaysia-Indonesia maritime industry were discussed during the two hours meeting. 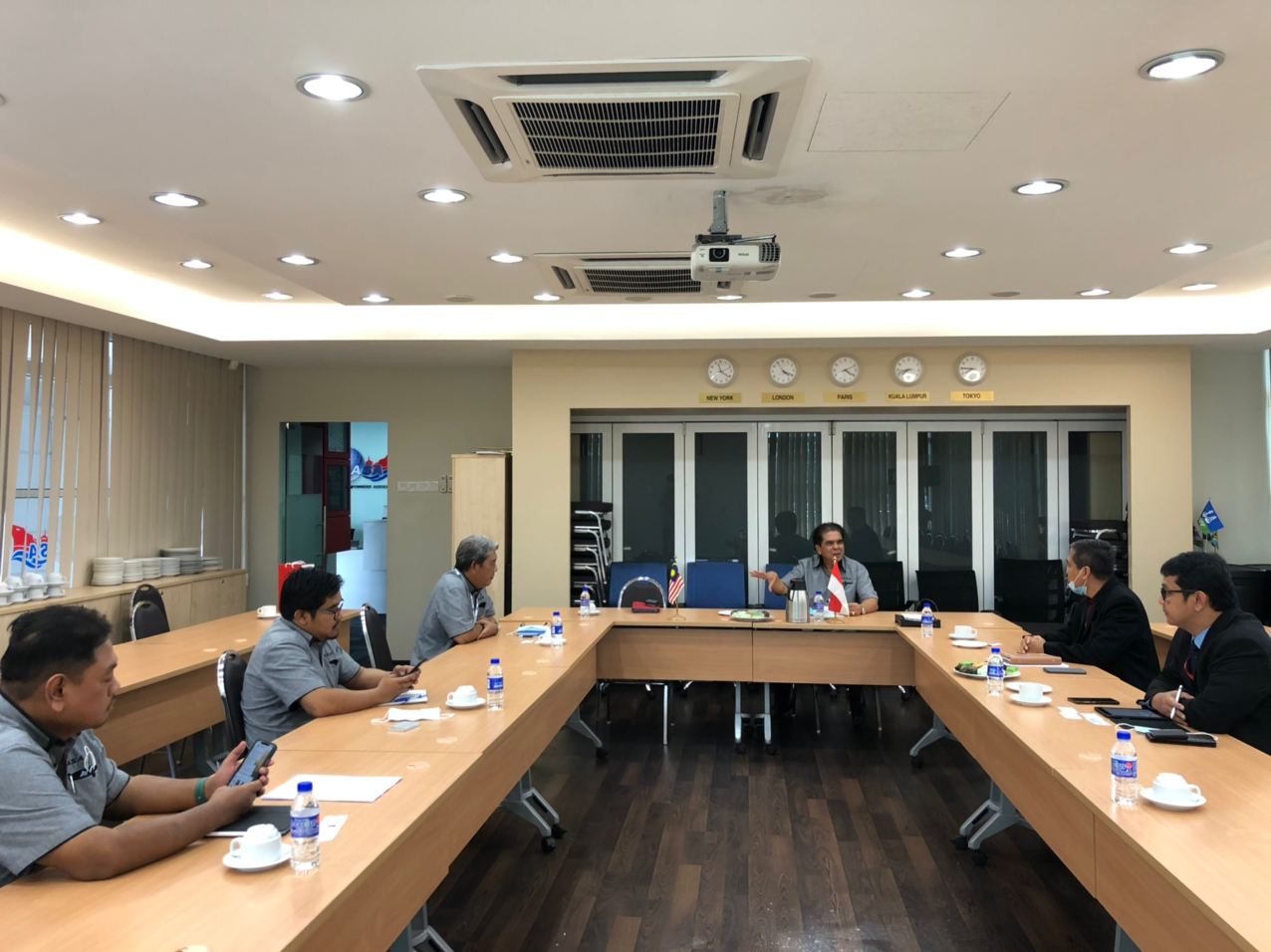 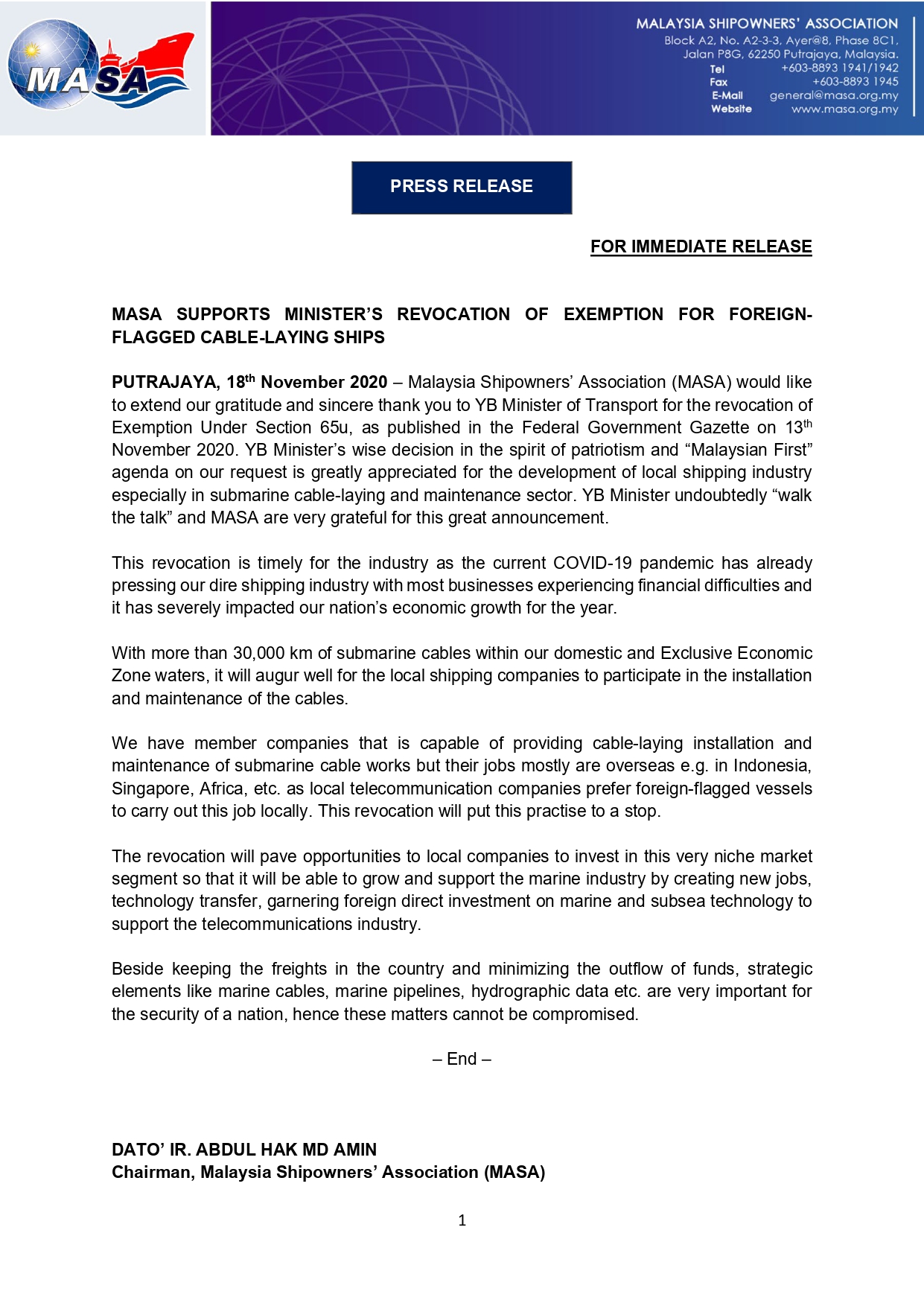 FEDERAL GOVERNMENT GAZETTE FOR REVOCATION OF EXEMPTION UNDER SECTION 65u [P.U (B) 166/2019]

The above subject is referred.

For your information, the Exemption Under Section 65u [P.U. (B) 166/2019] published on Federal Government Gazette on 29th March 2019 is referred for non-Malaysian ships from the application of subsection 65KA (1) of the Ordinance in respect of repair services of submarine cables landed at any submarine cable landing centre in Malaysian waters.

Thus, Malaysia Shipowners’ Association (MASA) would like to extend our gratitude and sincere thank you to YB Minister of Transport, Datuk Seri Ir. Dr. Wee Ka Siong for the revocation. YB Datuk Seri’s wise decision in the spirit of patriotism and “Malaysian First” agenda on our request is greatly appreciated for the development of local shipping industry. 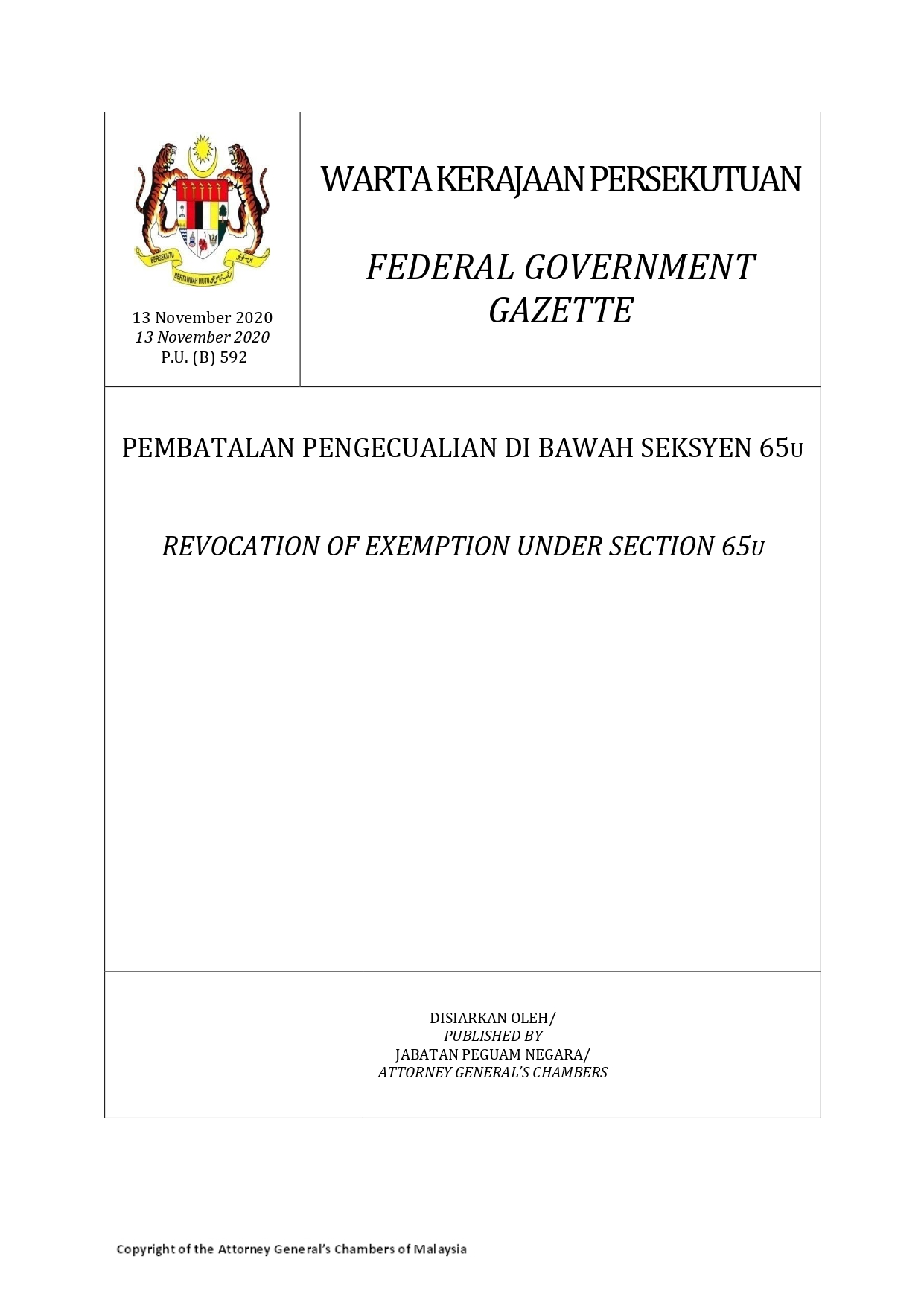 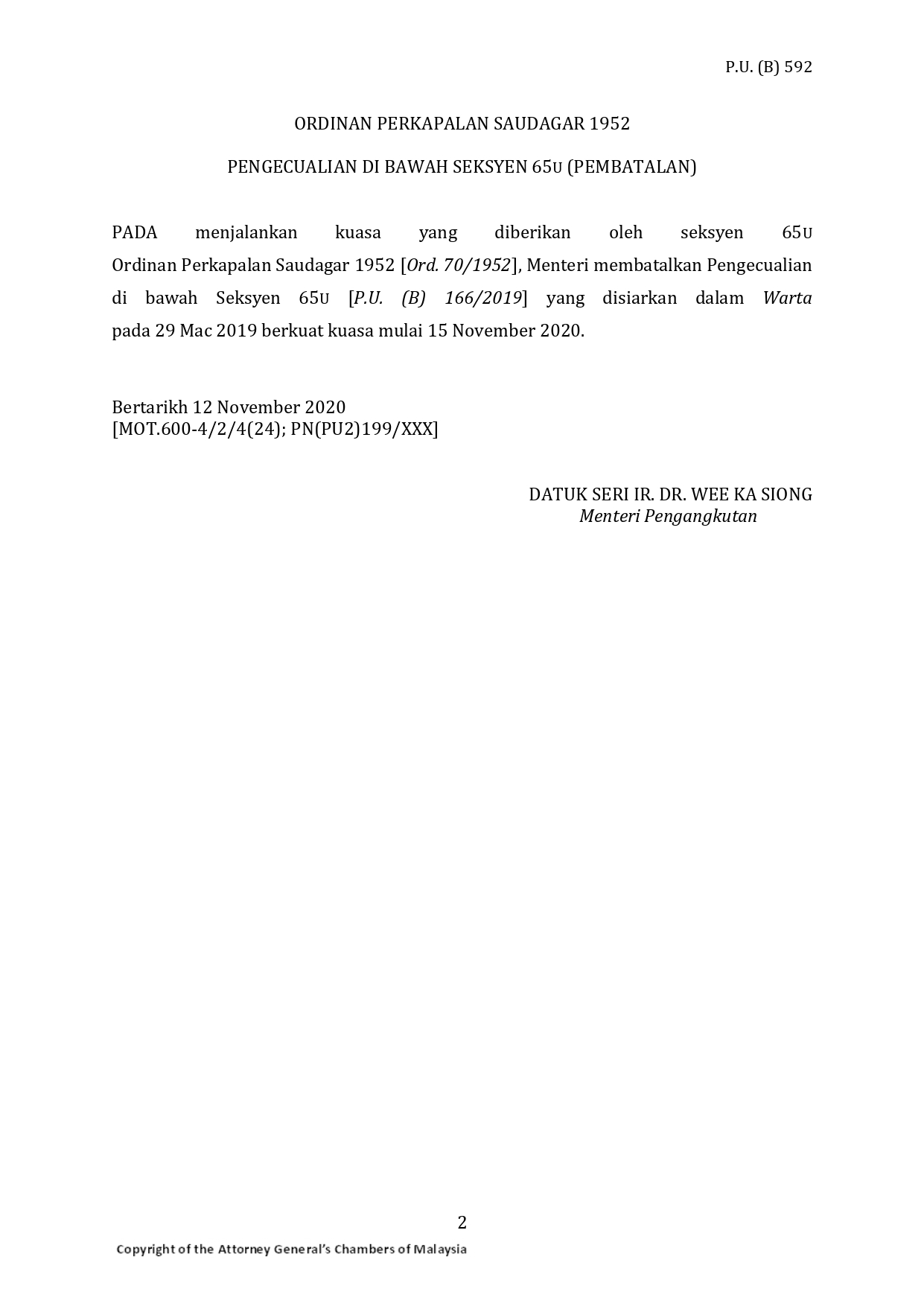 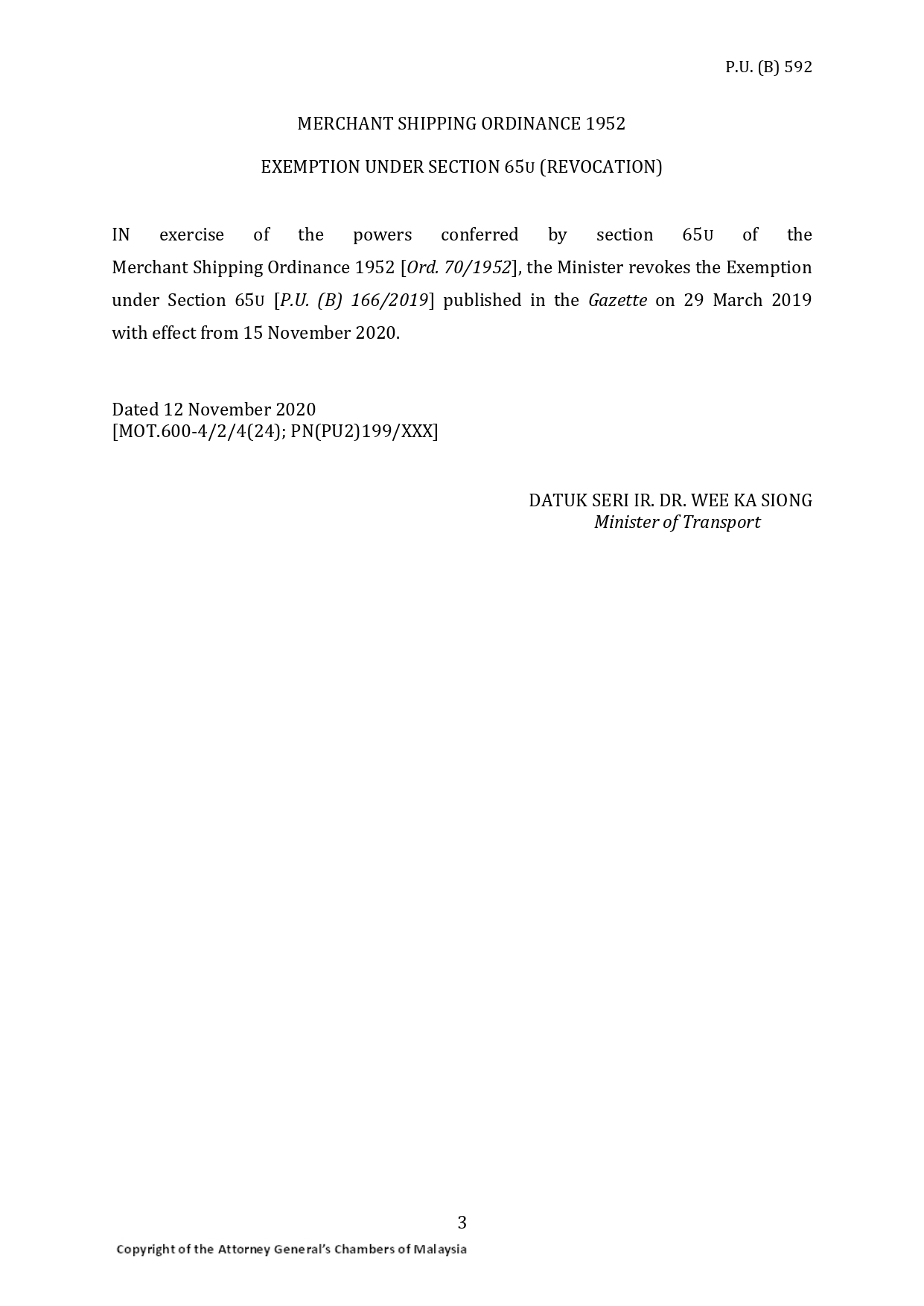 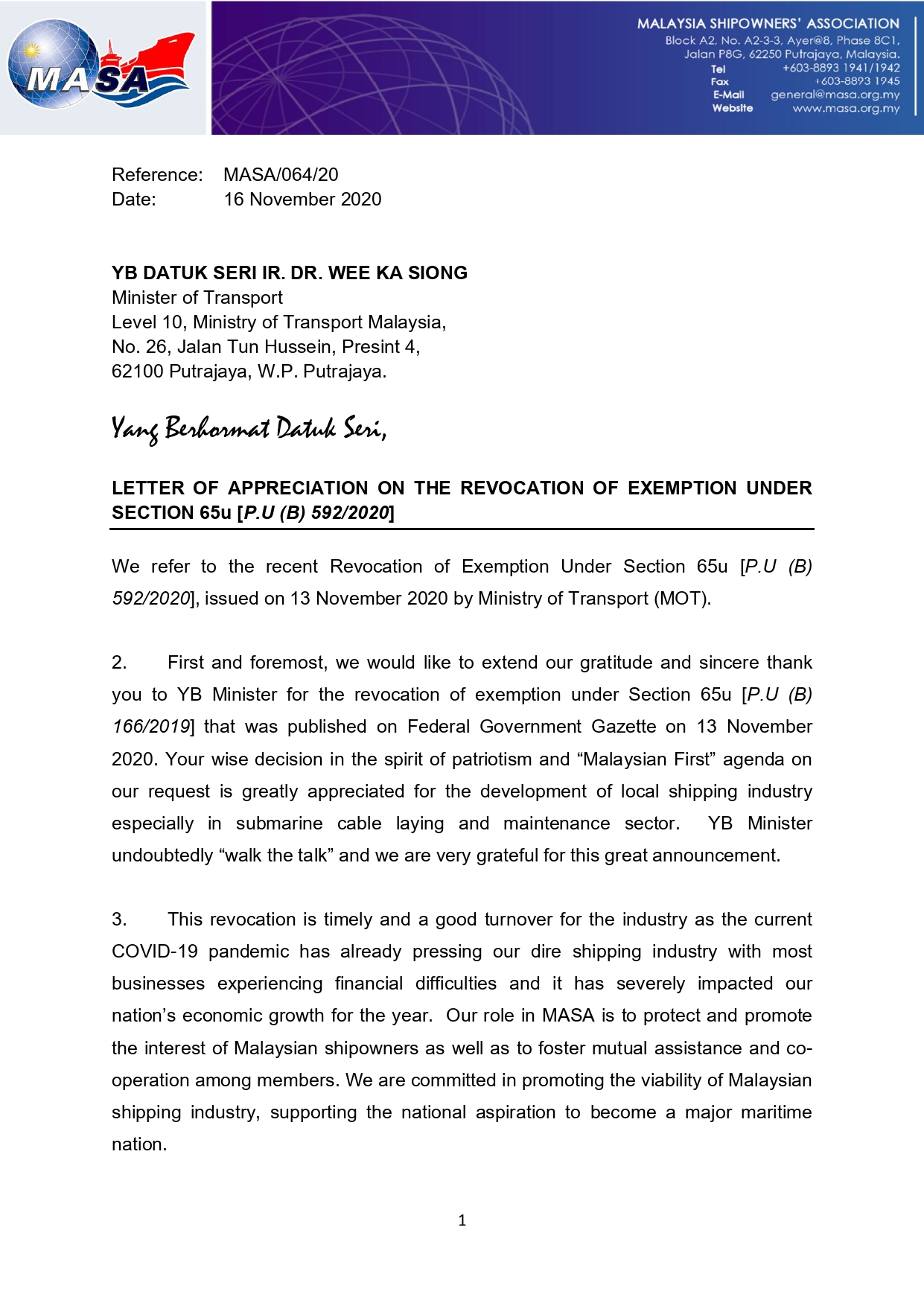 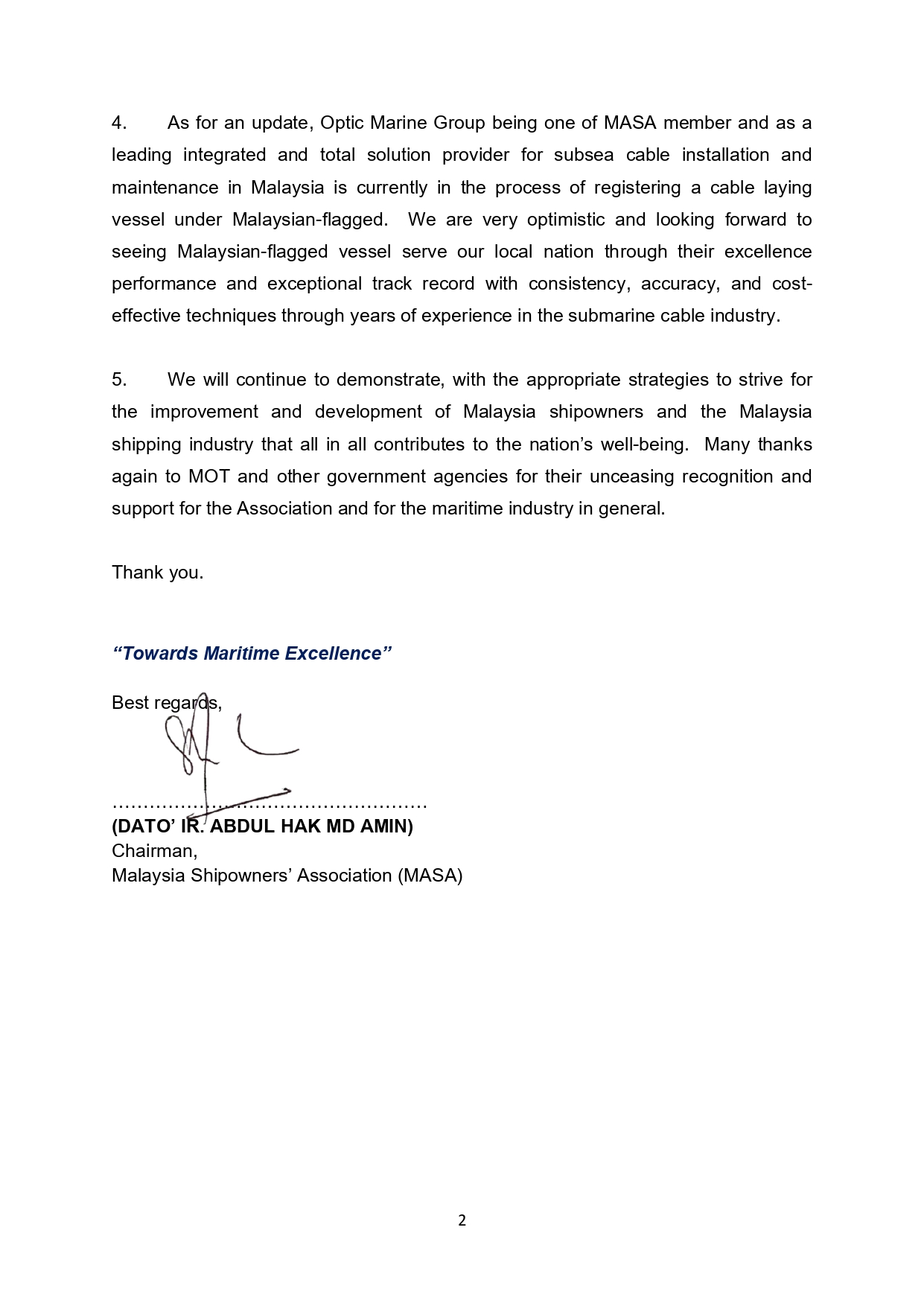 Members may also refer the same at Attorney General Chamber’s website as below:

MASA Wishes You a Happy Deepavali 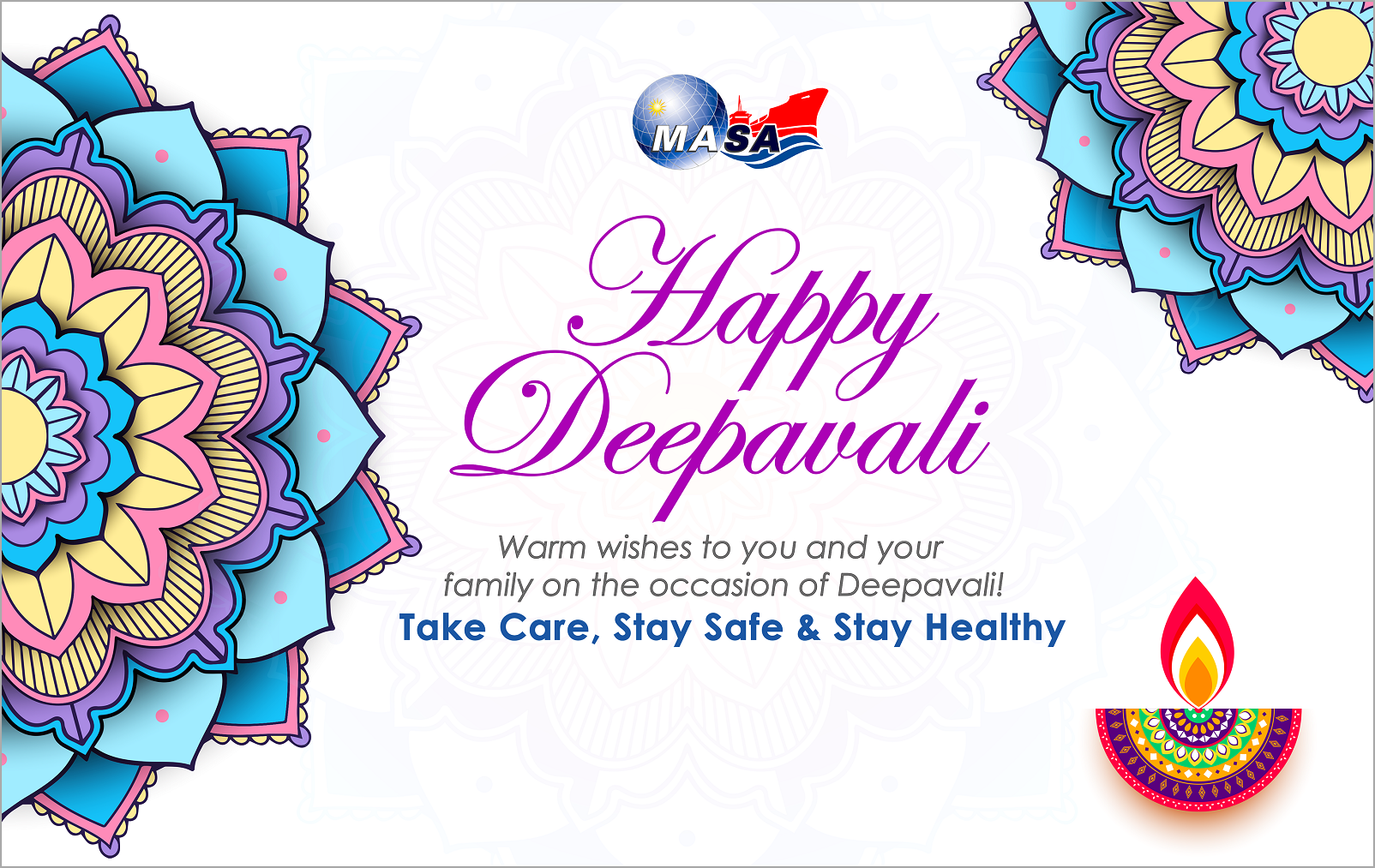 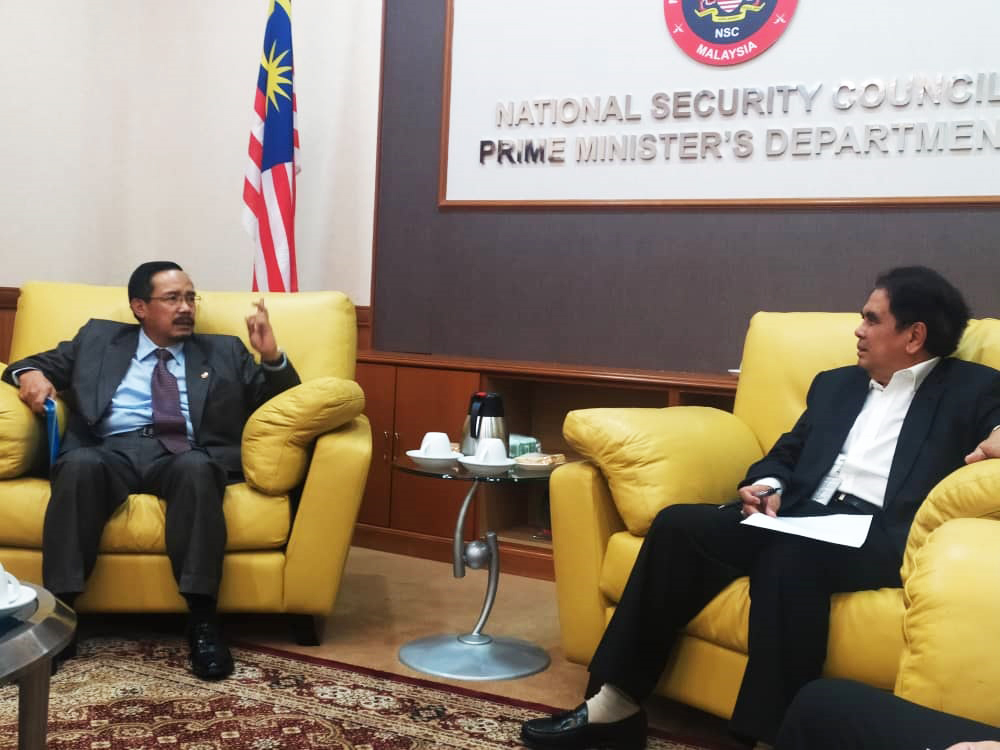 SIBU: The Malaysia Shipowners’ Association (Masa) is seeking government intervention for the sustainability of the country’s shipping industry, which is experiencing financial difficulties due to the Covid-19 pandemic and premature termination of contracts by oil majors due to low prices.

“Malaysia’s shipping industry is a major contributor towards Malaysia’s economy, growth, and trade as 90 per cent of Malaysia’s trade is from sea. This industry contributes about 16 per cent of the national GDP (gross domestic product) in 2017. It has also provided about 70,000 jobs directly and indirectly in domestic human capital.

“From seafarers to those in the supporting industries like ship repairs, shipbuilders, ports, shipping agencies, cargo brokers/surveyors, logistics players, equipment suppliers etc, and indirect industries like hotels, airlines, universities, etc ,” he said in a statement.

In view of the prevailing conditions surrounding the shipping industry, Abdul Hak said sufficient financing and facilities must be put in place.

“The focus should be for the government to provide financial assistance to the existing shipowners that are struggling for survival following the recent economic downturn and slowdown in the shipping industry, eg extend the loan moratorium period for shipping companies for six months ending April 2021, zero interest for one year for current loans, using the shipping fund announced last budget to subsidise existing shipping loans, more industry friendly and less stringent requirements by the banks, tax rebate or grants, and granting moratorium automatically to the shipping industry irrespective of their revenue,” he said.

According to Abdul Hak, the government should help provide working capital by Danajamin to support financially distressed Malaysian shipowners affected by Covid-19 and consider extending the availability of the guarantee scheme up until 2021.

He said although 100 per cent tax exemption was granted to Malaysian shipping companies under Section 54A of the Income Tax Act 1967 for a period of three years until 2023, such a short period would not be able to help shipping companies plan and invest in new assets.

“In order to encourage and promote the competitiveness of the shipping sector, the tax exemption regime should be permanent and to be extended to all vessels under the Section 54A of Income Tax Act 1967 and shall be defined as ‘Malaysian Ship’,” he said.

He also called for the reinstatement of Cabotage Policy between Peninsular Malaysia, Sabah, Sarawak, and the Federal Territory of Labuan as he claimed the current exemption has made Malaysian ships uncompetitive and vulnerable in maintaining their existing fleet or tonnage.

“This will consequently lead to the negative rise in Balance of Payment (BOP) on shipping freight. Using foreign tonnage for domestic trade does not provide any revenue for the government except a meagre fee to obtain the DSL (domestic shipping licence).

“The government should consider reinstating and strengthening the Cabotage Policy as it is a universal policy being practised around the world and vital for a country’s shipping industry, not only for commercial reasons, but importantly, for security matters. A sizeable domestic merchant fleet can be quickly used for national defence or as transporters during emergencies or conflicts, especially since our country is separated by the South China Sea,” he said.

For oil tankers, Abdul Hak said they were the supply chain of two National Key Economic Areas – palm oil and rubber, as well as oil, gas, and energy sectors.

He called on the government to introduce a policy to encourage resident Malaysian companies to export using Malaysia flagged vessels to reduce the BOP deficit and encourage GLCs to buy using Free on Board and sell using Cost, Insurance, and Freight.

KUALA LUMPUR, Oct 30  —  The local shipping industry has been inundated by a number of issues, chief among them being financial difficulties and the lack of financial aid, as well as the cabotage policy exemption.

The tidal waves triggered by the COVID-19 pandemic, coupled with the low crude oil price, have caused severe disruptions to maritime businesses and the supply chain; exacerbating the challenging business climate in the industry and affecting its long-term economic development and social welfare.

“Many shipping companies are facing financial difficulties due to the COVID-19 pandemic and premature termination of contracts by oil majors due to the low oil price.

He noted that although Bank Pembangunan Malaysia Bhd (BPMB) had relaunched the RM1.5 billion Maritime Fund 2.0 (MF 2.0), which the government aims to use to modernise the country’s maritime sector, the status of its utilisation by the shipping industry is currently unknown.

“The fund is open to shipping and shipyard companies, as well as marine oil and gas-related activities, however, the MF 2.0 is only available until Dec 31, 2020, which leaves us with less than a year until it expires.

“We do not know if the fund has been fully utilised by the shipping industry,” he added.

Abdul Hak said the government should focus on providing financial assistance to the ailing and distressed shipowners that are struggling for survival following the recent economic downturn and slowdown in the shipping industry.

“On behalf of the shipowners in the country, we hope the government will look into these matters in the upcoming Budget 2021, and adopt measures to assist the affected industries and companies, especially in dealing with the COVID-19’s economic impact to the Malaysia shipping industry,” he told Bernama.

He said MASA had also conducted a survey on the challenges faced by its members during the pandemic, which led to the conclusion that it would take some time for the industry to fully recover.

According to the survey, the supply chain had been impacted due to the disruption of shipping activities, and some of the delivery of the goods had either been cancelled or would not arrive on time due to delays at the loading and discharge ports.

“Shipping companies suffered heavy losses due to less cargoes or vessels left idle or laid-up. Operational costs such as demurrage charges, penalties, loan payments, crew costs; all of these have impacted most of the companies’ cash flows.

“Without scaling down their operations during the Movement Control Order, shipping companies face an average potential short-term loss of between RM15 million and RM30 million — depending on their size — due to the decline in revenues, and the losses are expected to double in the long term,” said Abdul Hak.

As such, MASA hopes that the loan moratorium period for shipping companies could be extended by another six months to April 2021, and for the moratorium to be automatically granted to the companies, irrespective of their revenues.

It also hopes for the introduction of zero interest loans for one year for existing loans; utilisation of the shipping fund announced under last year’s budget to subsidise existing shipping loans; more industry-friendly and less stringent financing requirements by banks; as well as tax rebates or grants.

Meanwhile, commenting on the cabotage policy, Abdul Hak said the current exemption has left Malaysian ships vulnerable and uncompetitive in maintaining existing fleet or tonnage, leading to the negative rise in balance of payment on shipping freights.

“Using foreign tonnage for domestic trade does not provide any revenue for the government, except the meagre fee charged to obtain the domestic shipping licence.

“The government should consider reinstating and strengthening the cabotage policy, as it is a universal policy being practiced around the world and vital for a country’s shipping industry, not only for commercial reasons, but more importantly, for security matters,” he said.

BUDGET 2021: SEEKING GOVERNMENT INTERVENTION FOR THE SUSTAINABILITY OF SHIPPING INDUSTRY 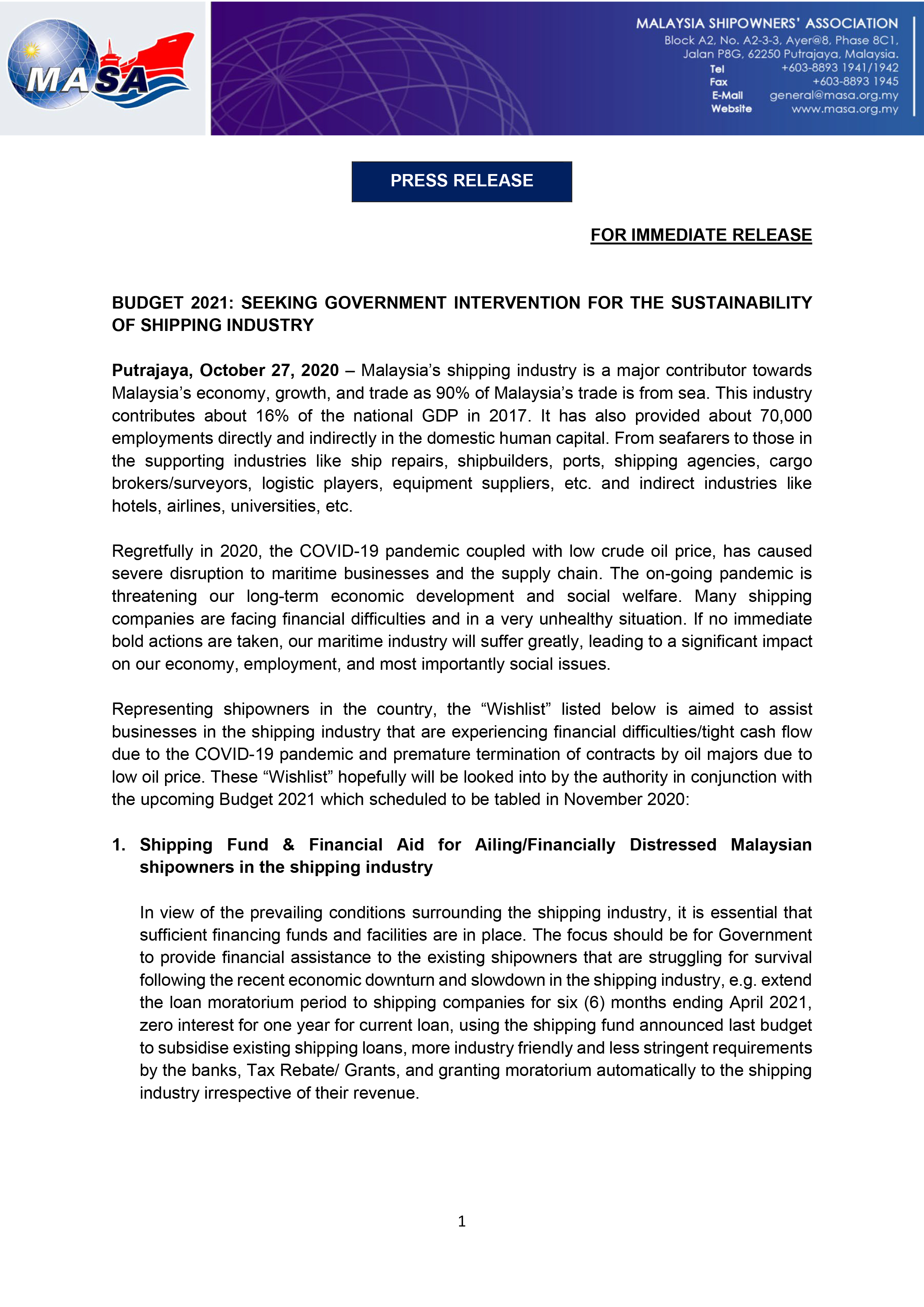 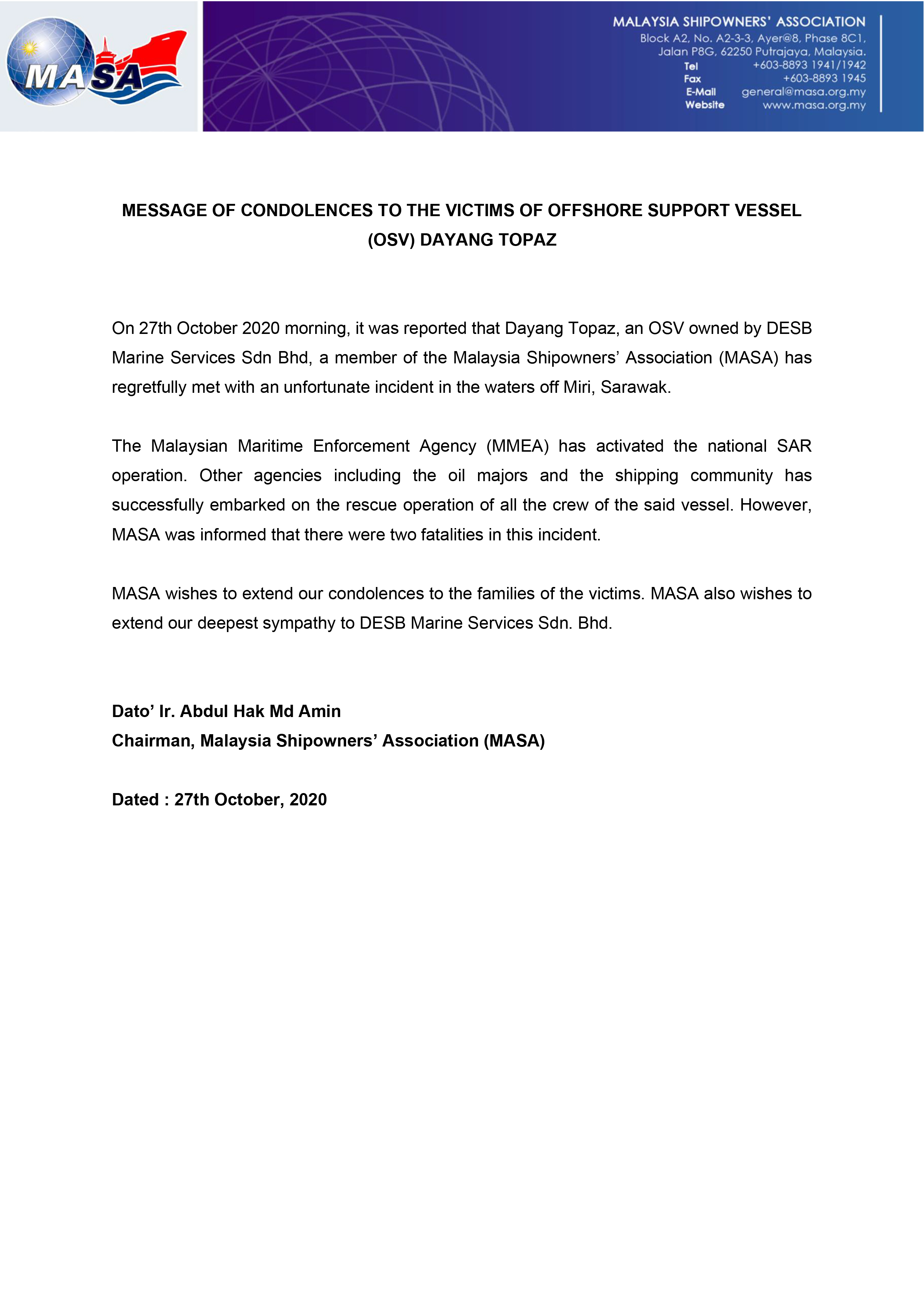